Latest News
Home /What Are Indias Farmer Protests & Why Did Rihanna Tweet About It?

This is an opinion.

“Why are we not talking about this?” Rihanna tweeted on Tuesday.

She was referencing India’s farmer protests that have gone under the radar for many people in the western world. And Rihanna is right. We should be talking about this because it’s not just about fed-up farmers who are oceans away. It’s about the foundations of democracy and the potential overreach of a government.

And that affects us all.

Rihanna has been a busy activist lately. First, she brought awareness to the farmer protests in India:

The tweet has gone viral, gaining over 150k retweets. But she wasn’t done there. She also played a small part in spreading awareness around the ongoing crisis in Mynamar:

Both of these pressing issues deserve the attention of the international community. Residents of Mynamar have started protesting the military coup that saw their leader Aung San Suu Kyi, detained last month.

The protests in India might not be as forceful as a military coup, but there is a battle for true democracy in both cases.

What Are India’s Farmer Protests?

Farmers in India have been protesting recent agricultural reform in their country. Farmers were previously guaranteed certain prices for their crops by the Indian government—up until recently.

New changes allow farmers to sell their crops to anyone at any price.

While that may seem to create more freedom, farmers are concerned that corporations will exploit these rules and drag down the price of their crops.

According to CNN, farming is the main source of livelihood for 58% of the country’s population of 1.3 billion people. So it makes perfect sense why so many people are upset.

And upset they are.

Check out this video of the protests: 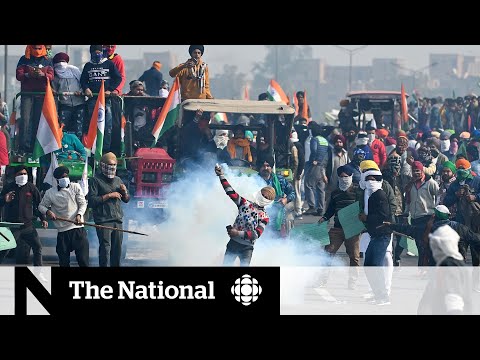 Last week, thousands of farmers stormed New Delhi’s historic Red Fort. Farmers breached barricades and clashed with police. One farmer was killed when a tractor tipped on top of him.

He joins the 146 other farmers who have died during the course of the protests.

The agricultural reforms were alarming enough for the citizens of India, but the government has taken concerning steps to try to mitigate the protests, which is partly why people like Rihanna are speaking up.

India is the world’s largest democracy. But in recent days, the term ‘democracy’ should be used lightly.

In the past few years, the Indian government has been engaging in forced blackouts of the internet when tensions rise. The internet is obviously one of the most efficient ways for communities to organize and spread information. And Indian officials want to make sure that doesn’t happen at certain times.

According to the Software Freedom Law Center, India leads the world in internet shutdowns. In 2019 alone, Indian officials cut off the internet over 100 times.

In 2019, following a rewriting of the constitution, which removed autonomy for India-controlled Kashmir, the Indian government cut off or restricted the internet in Kashmir for 213 days.

And they’re doing again with the farmer protests. Multiple areas have suffered from internet bans due to the protests.

Devdutta Mukhopadhyay of Internet Freedom Foundation told CNN that the measures were “extremely draconian.” She also said there’d been mob violence against protestors due to the shutdowns.

The protests in India are much bigger than a handful of disgruntled farmers. It’s an attack on the foundations of democracy.

We all deserve to communicate freely and nonviolently with each other, especially in times of turmoil. Luckily, people who have that freedom, like Rihanna, are using their voices.